If you’re new to Lenormand or you’re still trying to get your head around how Lenormand is different, then you will find plenty of interesting bits in this video.

People who are attracted to Lenormand immediately pick up that there is something special about this deck.

It looks simple because it’s small and has everyday symbols on it, and yet Lenormand Readers draw these huge Grand Tableau spreads that look really complicated and intimidating to read.

I will tell you what exactly makes Lenormand different from other practices including the Tarot, what makes it such an enjoyable way to read cards, and why we can do with it the things we do. This will also help you appreciate how Lenormand really works. It is an amazing deck.

The first thing that makes Lenormand different from other decks is that it is small: It has only 36 cards. This is very different from the Tarot which has 78 cards, and most other oracle decks that often have 40 or more cards.

So from the get go, when we land on Lenormand, we immediately see that it’s a small deck. And what adds to this, is that Lenormand decks typically come in small sized cards. So we just look at this deck, and think … “this is tiny!”

The second difference about Lenormand is that the cards have very simple symbols on them. Yes, there are insets like the card number, the playing card, and the quote - and we’ll talk about them in other videos - but the main symbols of the card are what we interpret in readings.

Lenormand's card symbols are simple and straightforward, which means that we can almost immediately make sense of the cards.

There are only a few cards that might confuse you at the outset. For me, it was the Lily and the Tower. I couldn’t make much sense of them at first. The Lily is about career and life path, and the Tower is about the past and time. But they have other meanings as well.

There were also a few other cards that I sort of understood but couldn’t really make sense of them in a reading - like the Cross and Bear. The Cross is about spirituality and also burdens, tough decisions, and sacrifice. And the Bear makes things big and can be about wealth or competition.

But in general Lenormand’s card symbols are from everyday life and we immediately know what they’re about, so we can readily interpret them in a reading. 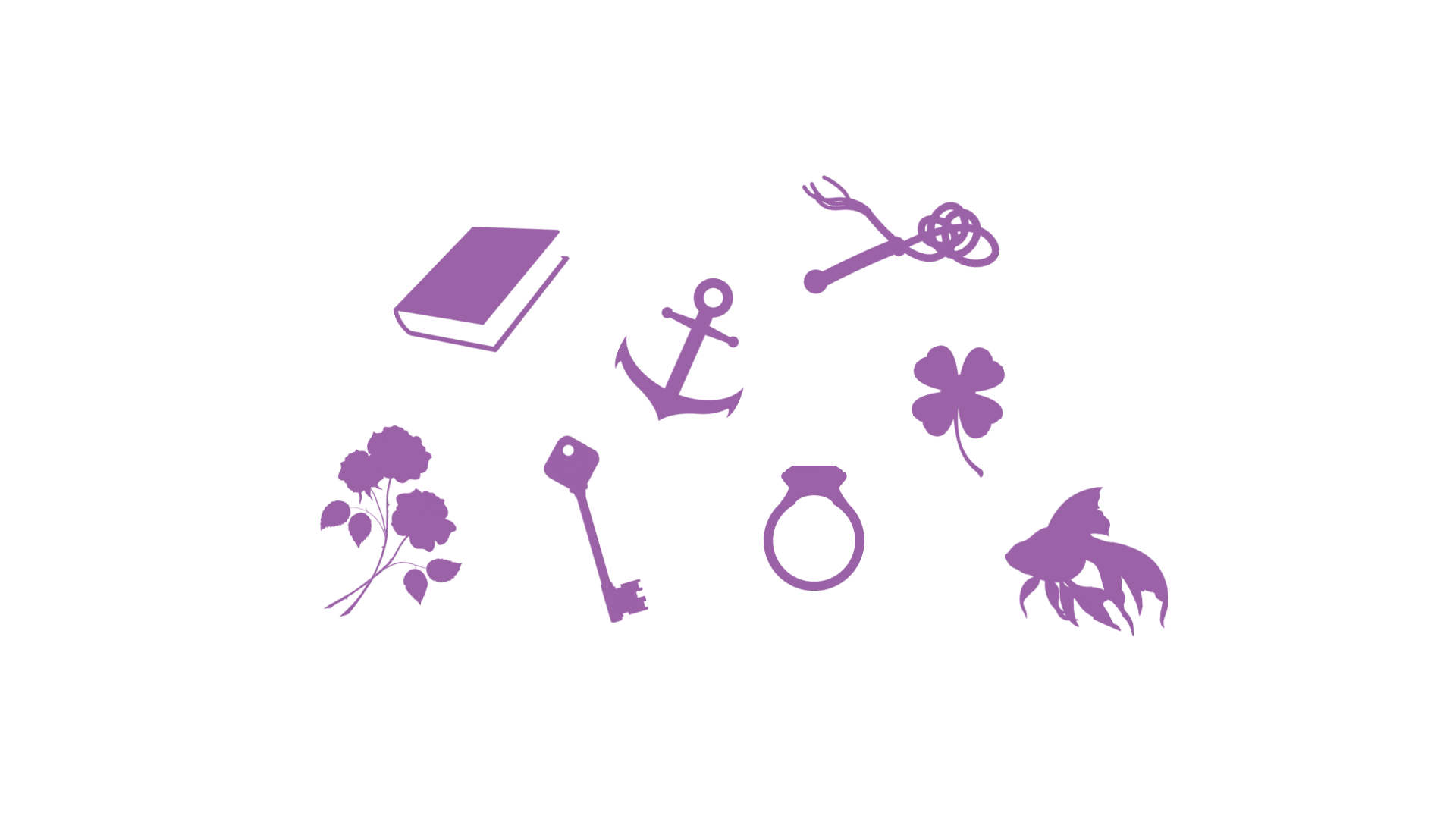 This is different from the Tarot which has a language of symbols that we must first learn before we can interpret in readings.

The suit symbols are about different life areas, for example, cups are about emotions and relationships. And the Major Arcana have a lot of depth and can be tricky to understand at first.

So we have to know the language of the Tarot before we can read it effectively.

In Lenormand, the card symbols are not esoteric at all, and we don’t have to first learn their language in order to make sense of them.

This leads us to the third unique feature of Lenormand.

The simplicity of Lenormand’s card symbols and the fact that it’s a small deck are the main reasons why many of us are a little suspicious when we first land on Lenormand.

We might wonder how can we get in-depth readings and a wide range of insights from just a few cards with everyday symbols on them? And the answer is Card Combinations.

Card combinations are the main feature of Lenormand’s approach that makes it totally unique. I think it’s the cornerstone of the whole practice.

Unlike with other decks, card combinations are not optional in Lenormand. We have to interpret them in combinations, and that’s how we can get a wide range of meanings and insights from the cards.

There are 630 card pairs, and 7,140 triplets! So that is plenty for variety and unique meanings.

Of course you’ll wonder, well how do I even begin learning that many card combinations. Here’s a hint: There is nothing to memorize, but we’ll get to this another day!

So now that we know what’s the secret to getting a lot of insights from just 36 cards with everyday symbols on them, we know why we can do huge Grand Tableau readings with Lenormand.

We can read much longer lines, like seven- and nine-card sentences. And it also means that we can read the cards in any direction. We can read them in a horizontal, vertical, or diagonal sentence.

And that’s why creating Lenormand layouts with several lines of cards brings out so much detail out of the reading.

This method of doing layouts is called Tableau-style, from the French “Tableau” which means portrait.

Tableau-style is completely unique to Lenormand. I would say that the key feature of Tableau-style reading is that a card is read over and over as part of different sentences.

This is very different from the Tarot and other methods where each card in a layout has a specific position and role within the reading.

For example, the popular 7-card horseshoe spread has 7 cards laid out in the shape of a horseshoe. The first three cards are the past, present and future. The top card represents the obstacle. The 5th card is about other people. The 6th usually gives the advice. And the last card represents the outcome. 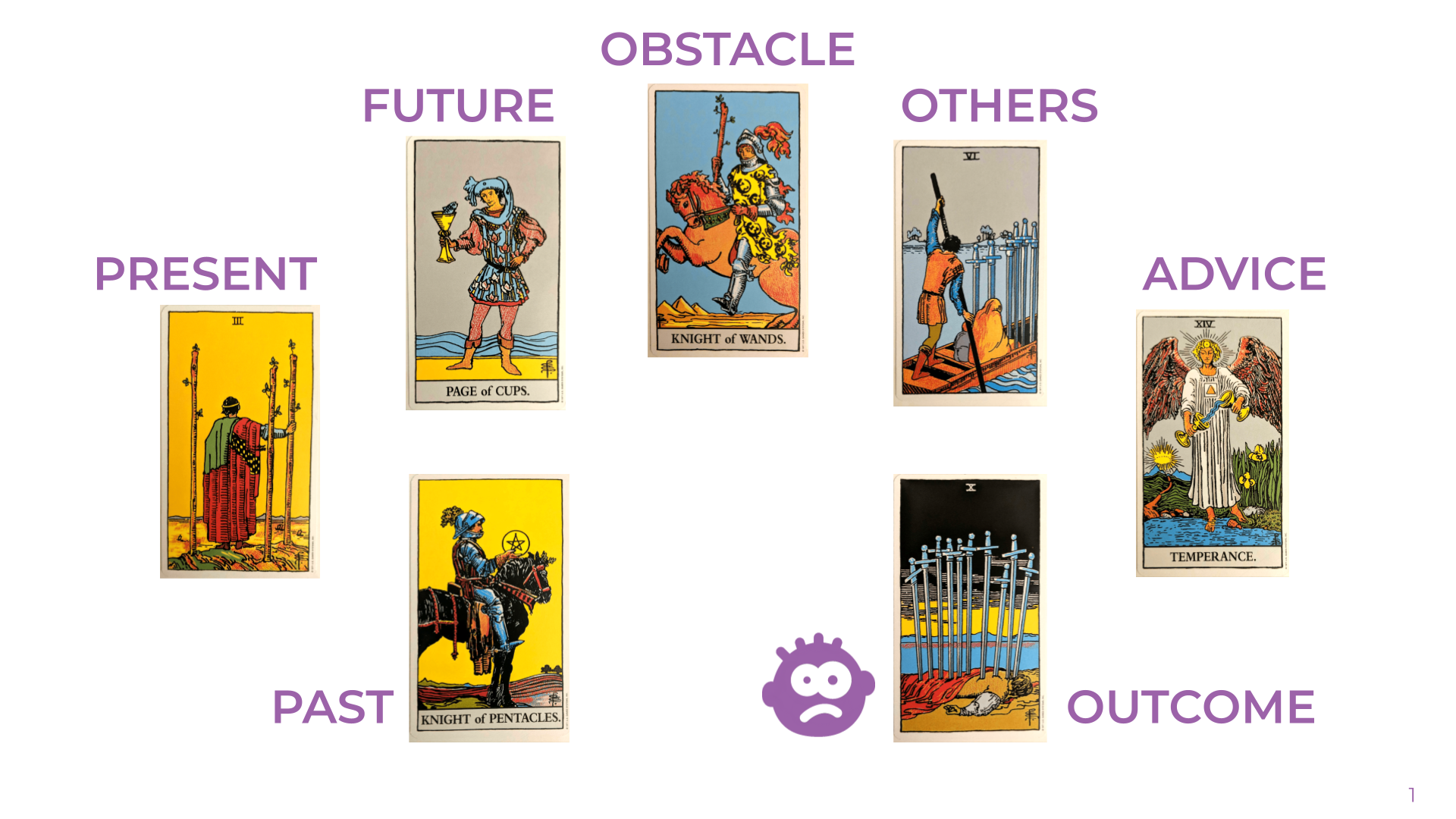 So you see here, we read the cards in turn, each card has a position and it offers a specific indication. And the cards are pretty much restricted to their position.

Not so in Lenormand. Yes, we can assign different indications to different parts of a layout. For example, in a portrait, the right column can represent the past, the middle column the present, and the left column the future. But each card in these lines is also read as part of other lines, like the rows and diagonals.

This way we get plenty of insights from the cards. And it makes for a really dynamic and engaging experience.

When we grasp the keys behind Tableau-style reading, we usually don’t look back. It is so enjoyable to do a Grand Tableau and just get lost in all its details, reading line after line, and tying the cards together in all sorts of different ways. It becomes a process of contemplation. It is no surprise that Mlle. Lenormand herself is said to have spent a whole day on a Grand Tableau.

Is a Grand Tableau super hard to do? That’s also a topic for another day.